Now is not the time to panic
(Pre-loaded Audio) 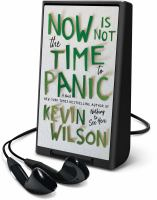 Also in this Series

Other Editions and Formats

General Note
Title supplied by publisher.
General Note
Release date supplied by publisher.
General Note
Issued on Playaway, a dedicated audio media player.
General Note
One set of earphones and one AAA battery required for listening.
General Note
Previously released by HarperCollins.
Participants/Performers
Read by Ginnifer Goodwin and Kevin Wilson.
Description
"From the New York Times bestselling author of Nothing to See Here comes an exuberant, bighearted novel about two teenage misfits who spectacularly collide one fateful summer, and the art they make that changes their lives forever. Sixteen-year-old Frankie Budge--aspiring writer, indifferent student, offbeat loner--is determined to make it through yet another sad summer in Coalfield, Tennessee, when she meets Zeke, a talented artist who has just moved into his grandmother's unhappy house and who is as lonely and awkward as Frankie is. Romantic and creative sparks begin to fly, and when the two jointly make an unsigned poster, shot through with an enigmatic phrase, it becomes unforgettable to anyone who sees it. The edge is a shantytown filled with gold seekers. We are fugitives, and the law is skinny with hunger for us. The posters begin appearing everywhere, and people wonder who is behind them. Satanists, kidnappers--the rumors won't stop, and soon the mystery has dangerous repercussions that spread far beyond the town. The art that brought Frankie and Zeke together now threatens to tear them apart. Twenty years later, Frances Eleanor Budge--famous author, mom to a wonderful daughter, wife to a loving husband--gets a call that threatens to upend everything: a journalist named Mazzy Brower is writing a story about the Coalfield Panic of 1996. Might Frances know something about that? And will what she knows destroy the life she's so carefully built? A bold coming-of-age story, written with Kevin Wilson's trademark wit and blazing prose, Now Is Not The Time to Panic is a nuanced exploration of young love, identity, and the power of art. It's also about the secrets that haunt us--and, ultimately, what the truth will set free."--,Provided by publisher.
Local note
PLAYAWAY

Wilson, Kevin, and Ginnifer Goodwin. Now Is Not the Time to Panic Findaway World, 2022.

Note! Citations contain only title, author, edition, publisher, and year published. Citations should be used as a guideline and should be double checked for accuracy. Citation formats are based on standards as of August 2021.